Welcome to the Getting Started Guide. This is where you'll find how to install and start playing Assist, along with tips for improving your skills.

If your looking for something that isn't in the getting started guide, try searching the forum, or check out the support page.

The following videos will cover downloading Assist, installing, and answering a few of the commonly asked questions pertainting to install locations, and start up errors.

Learn Tips and Tricks on different maps from some of the community pros. Be sure to stop by the Tactics Forum Board and share what you know and help other players grow.

Assist supports 3 platforms: Linux, Mac, and Windows. Choose your version in the Downloads section above. Once you have downloaded the correct version of Assist for your operating system, you should extract/unpack the contents. Make sure you copy both the Assist and the Assist Libs folder. Personally, I like to put it in my Start Menu since I use Windows:

Once you've found a location to place your files, start Assist. You will be using the 2.5Assist executable to play America's Army, so don't forget where you put these files! 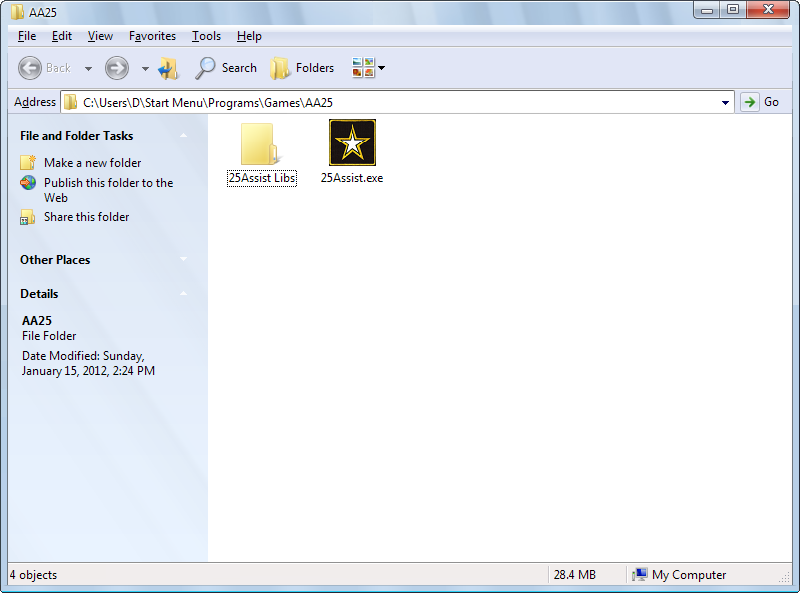 The first thing you will see is a Terms of Service Agreement. Make sure to read this clearly and hit "I accept", if you do. 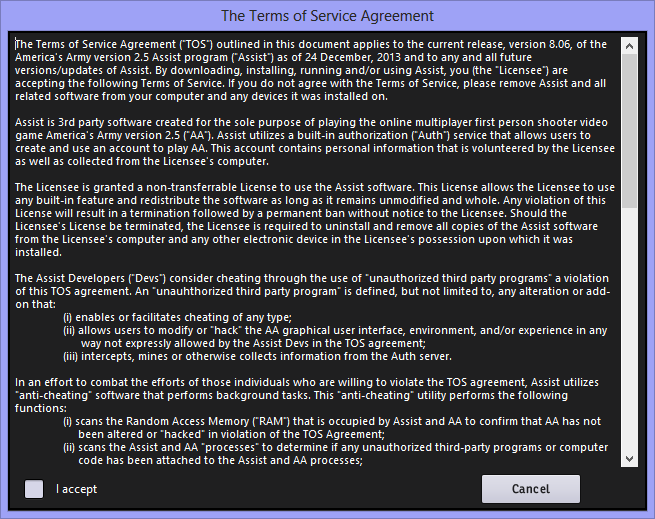 As many of you already know, Battletracker has been on its way down for a long time already. However, it's now (almost) completely shut down. Regular players have had their accounts migrated to the 25Assist database and will be able to continue playing with their existing log in infomration. Those who've not joined 25Assist in a long time (since some time in 2014), you'll need to create a new account here.

Since AA2 is no longer supported, all America's Army Personal Jacket accounts do not exist anymore. Your account/player information, and more is now located at Battletracker. In order to play America's Army through Assist, you will need an account at Battletracker. If you are a new player and do not have an account, register for one. If you've recently logged in to 25Assist you might still be able to log in to 25Assist with your old battletracker account. In that case, it'll have been transferred into a 25Assist accout. However, if you need a new 25Assist account, you'll have to register it here.

Once you have a Battletracker 25Assist account, you can use it to log in to 25Assist. (OLD:click on the link My Profile at the top of the page. Now click the Tracker Settings tab and enter your desired America's Army username. This is your in-game username. Don't forget to click the submit button at the bottom of the page) 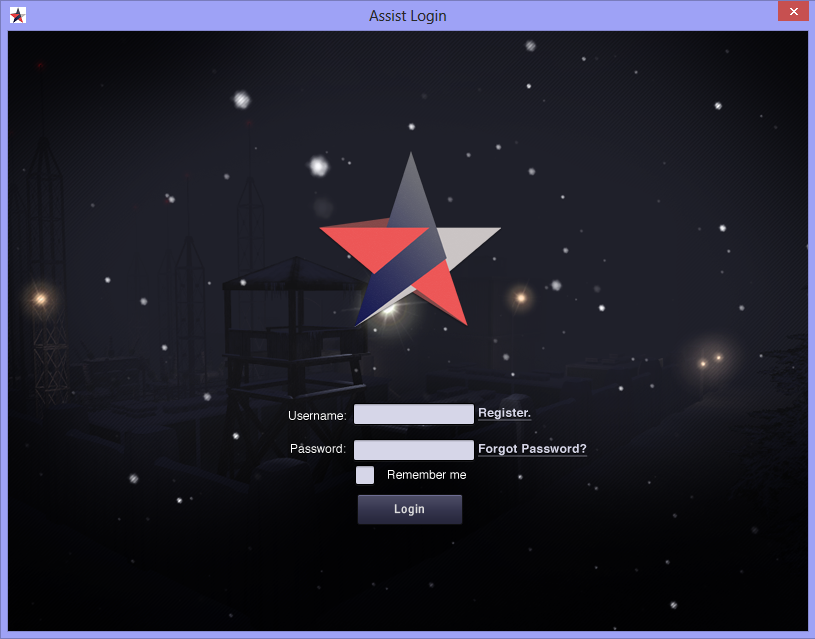 After you log-in, Assist will do some initial house-keeping so don't click cancel or block Assist while it gets itself ready. If you have a firewall (or antivirus) like me, it might ask you if you want to allow Assist to access the Internet. Of course, allow Assist to access whatever it needs and make sure the firewall/antivirus remembers to allow Assist access in the future. This is important because you never know if Assist will stop working because the firewall/antivirus is blocking it.

Once Assist has completed some house-keeping, it will ask you about America's Army. 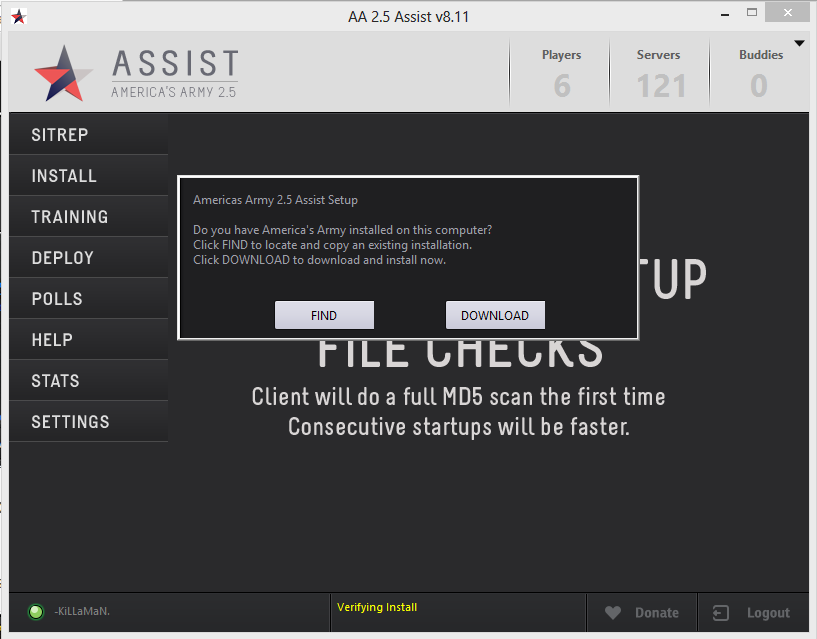 If you DO HAVE America's Army 2.5 installed already, click on FIND to locate it; 2.5Assist will copy that folder to its program folder. Do not click FIND if you have any version besides 2.5 installed.

If you DO NOT HAVE an America's Army 2.5 installation, click on DOWNLOAD to download America's Army 2.5. Assist will download and verify each part (i.e., textures, sounds, maps, etc) so users will find relief if they have a spotty Internet connection since Assist can just re-download the part that failed.

The stats tab hold all of your current America's Army stats. 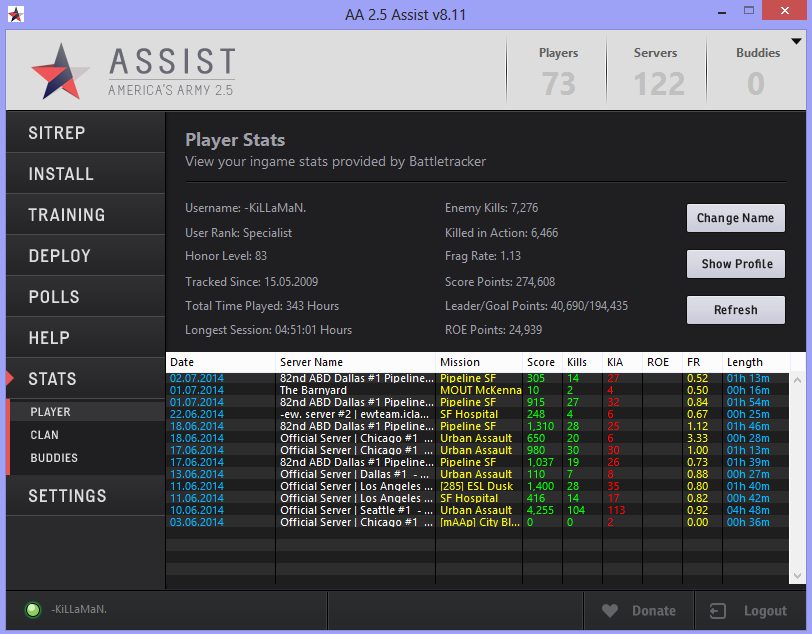 Where Did My Honor Go?

If the honor you see is not correct don't worry! We can fix this you for you. Please make an honor claim and tell us the following information: We generally no longer take honor claims.

Please remember, we are searching some of this information for you so be patient and give us as much information as possible to make it easier.

Settings are changed through Assist by clicking on the SETTINGS tab. There are three categories, Game, Video, and Sound. Settings can still be changed in game as well. That is where your keybinding will have to be done. 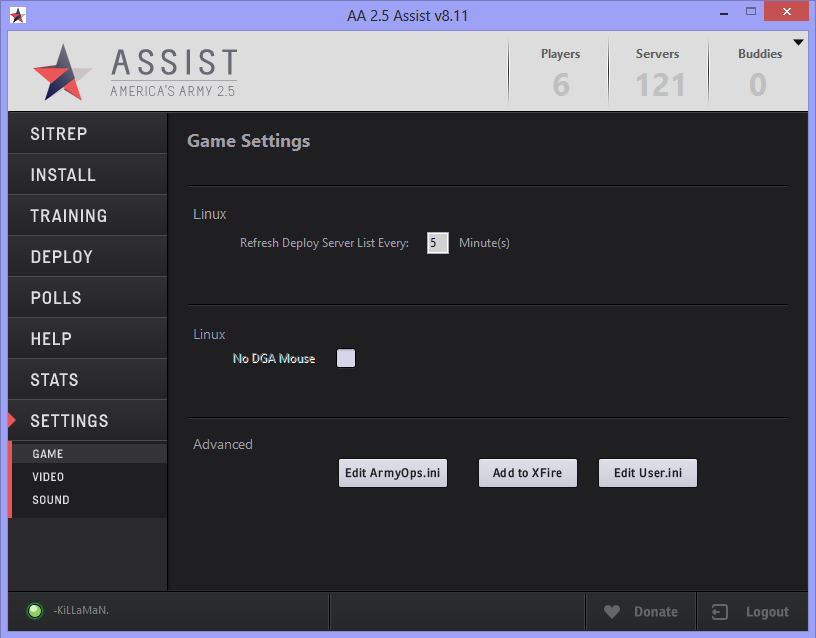 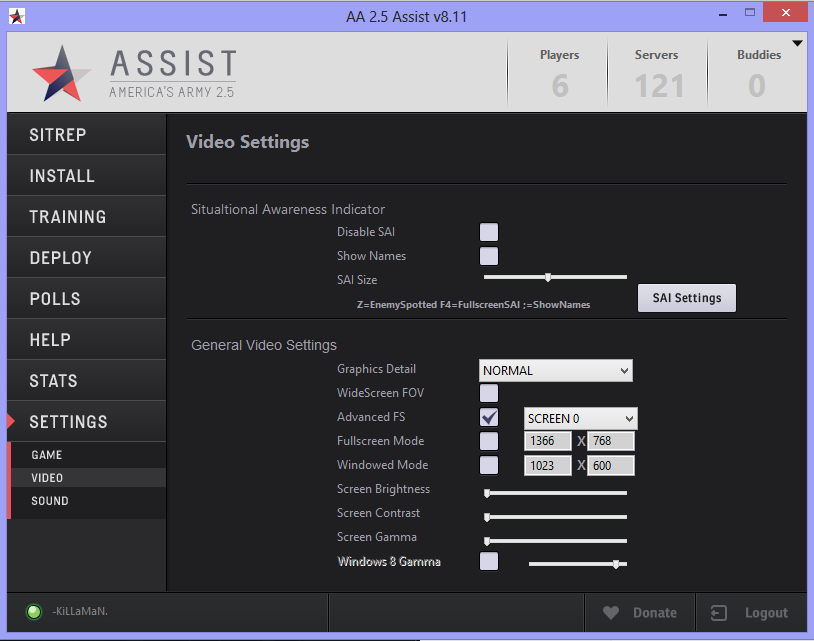 Changing Your Keys, Controls, and Keybinds

If you would like to add custom keybinds, you can click on the EDIT USER.INI button in the 2.5Assist SETTINGS tab. The user.ini file will then open. 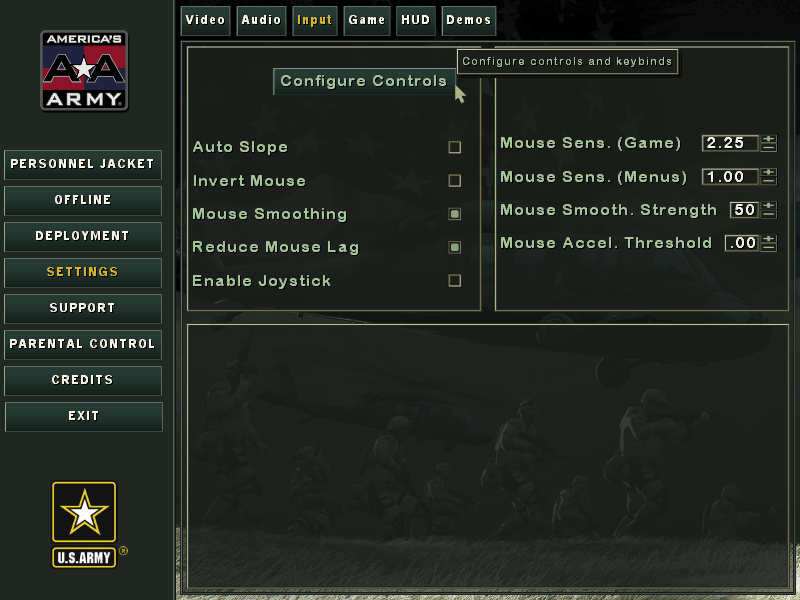 Training is no longer necessary as of August 8th 2014. It was previously enabled to retain an authentic feeling to the game. However, our statistics show that the majority of new users did not complete the training required to play. It has been disabled until further notice to allow growth in our community. Training is optional and you may complete it at any time but it will not affect online gameplay in any way.

Click on the DEPLOY tab in Assist to bring up a list of all servers. Clicking on the column names will sort the list by that column. Click on a server to view more information. Click the JOIN GAME button to join the server.

If you're playing America's Army and want to change or join a different server it's very easy. First, quit America's Army (hit ~ and type exit). 2.5Assist should still be open, so find the server you would like to join by checking the server list.

You have mastered Assist. You can ask your questions by visiting the forum where Assist users, administrators, and developers can help you directly there. But please write in a civilized, and mature manner and ask politely.

I believe that in conjunction with the current version of America's Army Proving Grounds that this version of America's Army should cease existence or be wholly reviewed and supported by the US Army. It seems like an extreme waste of resources (tax payer money) to have two games, with one potentially being considered a 'conflict of interest' in that it will take away from potential 'gamers' for the current version. Please email me with any questions or concerns, I feel like this matter may be of significant importance that I may have to escalate the issue to other areas of interest like the US Senator in my area.
seems like a good email what am i missing here
rwtw.joe131 1D [ASSIST]
actually i was kicked prior to that for not team killing anyone but its ok, even gunman was asking why i was kicked
-=LGC=-DrEvil 1D [ASSIST]
teamkilling everyone is not the right way to find out why you were kicked joe
rwtw.joe131 1D [ASSIST]
why was i kicked dr evil what did i do? die? you guys play and go like 1-10 in 10 rounds lol
TSK^NICO^ 1D [ASSIST]
why ask what map and then leave everyone let
TSK^NICO^ 1D [ASSIST]
bring joe back
-=LGC=-DrEvil 1D [ASSIST]
email whoever you want joe you will never play on an LGC server again
rwtw.joe131 1D [ASSIST]
don't worry badboy ill write an email to the real america's army for the violations of the EULA agreement for this game we'll see
rwtw.joe131 1D [ASSIST]
sorry to any of you not good enough at a dead game lol
rwtw.joe131 1D [ASSIST]
would love to know whyi was kicked? minding my business having a good time
Mr_Gunman-GB 1D [ASSIST]
LOL
Mr_Gunman-GB 1D [ASSIST]
The ransom is still 10 Bitcoin, as we agreed..... ^^
capnoob 1D [ASSIST]
good luck!
.Brahva. 1D [ASSIST]
I don't know who you are. I don't know what you want. If you are looking for ransom, I can tell you I don't have money. But what I do have are a very particular set of skills; skills I have acquired over a very long career. Skills that make me a nightmare for people like you. If you let my daughter go now, that'll be the end of it. I will not look for you, I will not pursue you. But if you don't, I will look for you, I will find you, and I will kill you....
eXp4int 1D [ASSIST]
Go Go Go
.Brahva. 2D [ASSIST]
???????????????????????????
.Brahva. 2D [ASSIST]
no one again.....................or still.........
Mr_Gunman-GB 2D [ASSIST]
:D
-=LGC=-BeaNer_MaN_76 2D [ASSIST]
LOL Gunman....
Mr_Gunman-GB 2D [ASSIST]
I said a hip hop, the hippie, the hippie to the the hip hip hop-a you don't stop the rock it to the bang bang boogie, say up jump the boogie to the rhythm of the boogie the beat.
SF][-General_alkos 2D [ASSIST]
CSAR,HOSPY,DOCK...
.Brahva. 2D [ASSIST]
...still... i meant lol\
.Brahva. 2D [ASSIST]
again
.Brahva. 2D [ASSIST]
no one here agin...........
GhOsTeD 2D [ASSIST]
can we all kinda get along and get over this dispute. We only have about 100 active players. We need to work together and not against each other guys. We all have the same goals
-=LGC=-BADBOY 2D [ASSIST]
https://discord.gg/72XhMajAkB
-=LGC=-BADBOY 2D [ASSIST]
https://www.lgc-clan-official-server.com/
Please Login To Use Shoutbox.

Important: Battletracker no longer exists. However, old Battletracker accounts may still work. You can create a new 25Assist account here